Starting with OpenSearch version 1.3.2 for 1.x, and 2.0.0 for 2.x, OpenSearch has expanded its artifacts into multiple distributions, including TAR, Docker, and RPM. Looking back, it has been a challenging and exciting journey to get here.

With TAR as the initial distribution, we were able to wrap the archive into a container as part of the Docker release and then expand into multiple architectures, including x64 and arm64. Development of other distributions was delayed because the fundamental code base involved much hard coding to extend it.

OpenSearch continually improves. The community has asked for an RPM package, as it is an easy way for LINUX users to deploy, run, and test OpenSearch and OpenSearch Dashboards clusters without complex manual setup. We see the demands and benefits of this new distribution and have prioritized its implementation. This effort led to a two-month-long project involving overhauling code and carrying out modularization activities and testing to advance the RPM distribution.

As the lead engineer on the RPM project, I would like to share the steps, processes, and results for adding new distribution(s) with the community. I hope you find this information useful in contributing to the code to add new distributions in the future.

The opensearch-build repository (repo) is the centerpiece of artifact generation for the OpenSearch Project. Most automation and pipelines run the code of this repo. To answer where to start the implementation of a new distribution (RPM for the purpose in this blog), we need to understand the workflow in the opensearch-build repo.

The OpenSearch Project’s final release artifacts (non-SNAPSHOT) have two formats: with plugins (normal format) and without plugins (min format, only for TAR). This naturally separates OpenSearch into two different parts: the OpenSearch engine and the related plugins. The engine is based on the main OpenSearch repository. The related plugins are in their own repositories, such as machine learning plugin, index management plugin, sql plugin, and many more.

The corresponding directories, build_workflow, assemble_workflow, and test_workflow, contain the code for the build, assemble, test stages, respectively. In this blog post, we focus on the build and assemble stages because they are crucial to implementing a new OpenSearch distribution.

While we are using Jenkins to execute the opensearch-build repo code for automated distribution builds, this blog post doesn’t go into depth on that topic; See OpenSearch automated build system is now live for more information. In this blog post, we focus on running the build and assemble code in a local environment with the necessary changes. 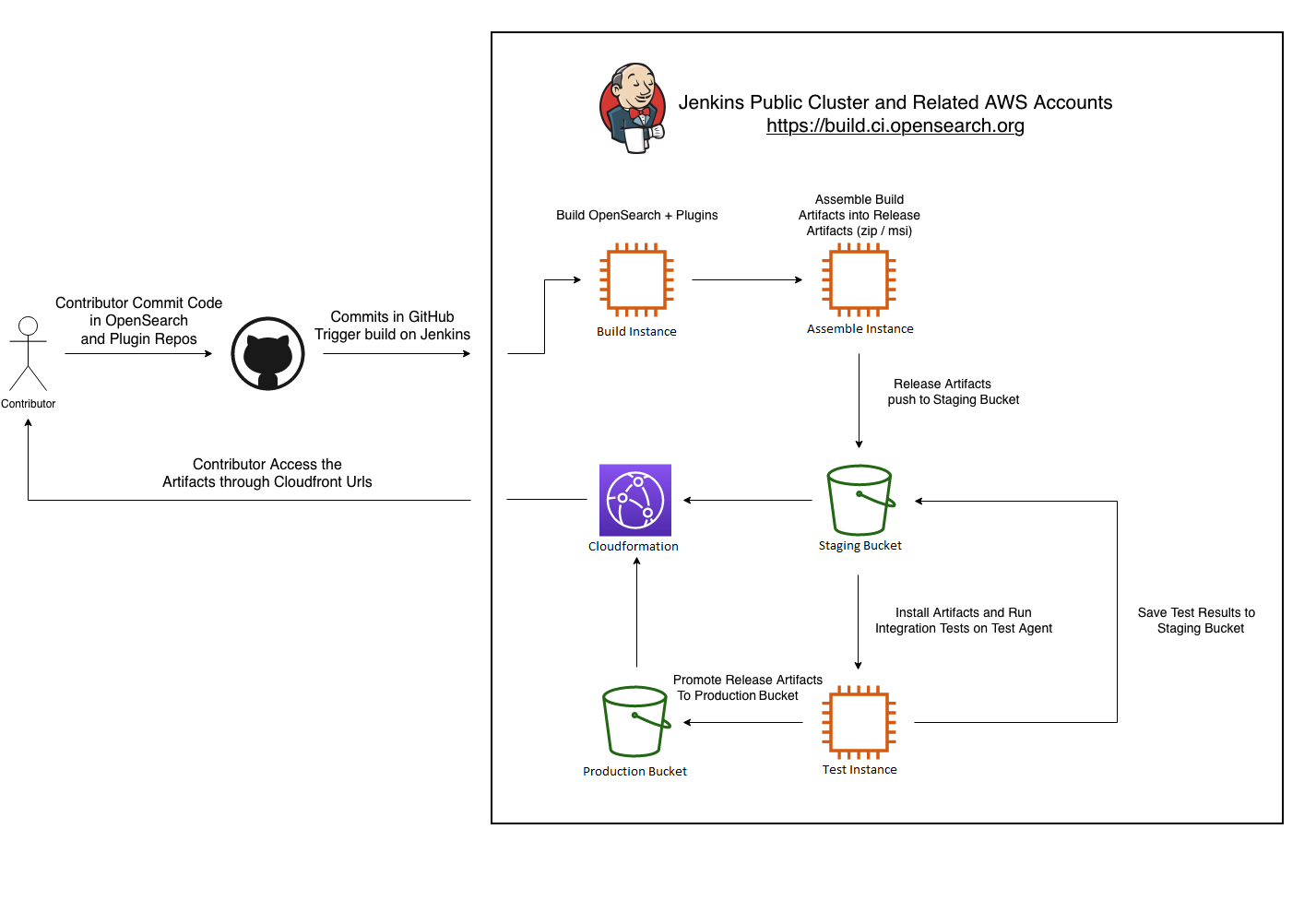 As shown in the figure above, after contributors commit their code or merge pull requests (PRs) in the opensearch-project repo, the pipelines on Public Jenkins will be triggered. From there, build_workflow, assemble_workflow, and test_workflow will be run sequentially, and then the final products will be promoted to the object storage production bucket and made available publicly at artifacts.opensearch.org.

A common question asked during the build_workflow is “How do we run it?”. To answer that question, it’s necessary to understand what available parameters we have access to in order to control the output.

Older version of opensearch-build/src/build_workflow/README.md before we add RPM

The figure above shows the parameters available in build_workflow before RPM is implemented. There is no --distribution parameter, as the --platform parameter is used to hardcode the distribution type. Initially, it was assumed that if platform=linux, then distribution=tar.

Let’s now look at the commands in build_workflow. First, clone the opensearch-build repo and move to its root directory, and then use the following command to build artifacts for the 1.3.2 version tarball as an example. Note that we specify the component to be OpenSearch only for the purpose of this blog post. All the components in input manifest file opensearch-1.3.2.yml will be compiled by default, unless you specify otherwise.

Next, we need to add a new parameter to handle the different distributions.

When running ./build.sh, it runs ./run.sh internally to check dependencies on python/pip, which then runs src/run_build.py. Note that src/run_build.py is the entry point to build_workflow and starts the building process, including handling the user-defined parameters (see run_build.py).

Next, you add the following code in src/build_workflow/build_args.py using the argparse module.

Other files will need updates to support this new parameter. Examples include src/build_workflow/build_target.py and src/run_build.py.

When running the build_workflow, you use an input manifest file (for this blog post, it’s manifest/1.3.2/opensearch-1.3.2.yml). This file consists of the components you want to build (the OpenSearch engine and related plugins). To learn more about the manifest files, read the code in src/manifests for more information. Two other manifest files (both named manifest.yml) are generated after build_workflow and assemble_workflow to record the results. The two manifest.yml files are referred to as “build manifest” and “bundle manifest”. Sometimes, “bundle manifest” is also referred to as “dist manifest”.

In build_recorder.py, you define the default value distribution as tar:

In build_manifest.py, distribution is None so that the older manifest.yml files from previous releases without the distribution key-value pair are compatible with the new code:

After the above steps are complete, you are ready to craft the build scripts. First, you will focus on src/build_workflow/builder_from_source.py. This file will call a subprocess that runs a shell script returned by the ScriptFinder function. The distribution value is None if related key is not found in input manifest, and you add a filter around the list of commands so that -d parameter is not called if distribution is None.

The logic of ScriptFinder.find_build_script is in src/paths/script_finder.py, which would allocate a build script named build.sh (this script has the same name as the one in the root directory of the opensearch-build repository but contains very different content and is used for component-specific build activity). This script can be found in one of the following paths:

For scripts/components/OpenSearch/build.sh, you add distribution as part of the variables and change how the corresponding Gradle task is called. In the OpenSearch engine, you use Gradle to compile the Java code into an artifact and component build.sh uses the platform value to decide the Gradle task. You now add additional conditions to set the format for the final artifacts: PLATFORM, DISTRIBUTION, and ARCHITECTURE.

The following command is called to run the proper Gradle task to build the OpenSearch engine RPM distribution on a LINUX host with x64 architecture.

Congratulations! You have successfully implemented the build of RPM.

The Python code can call the component build.sh and pass the distribution value so that the proper Gradle task is selected. After compilation, you get an OpenSearch engine min RPM as the artifact and a build manifest in builds/opensearch/dist/manifest.yml to pass on in assemble_workflow. If you specify more components in --component or leave it empty by default, you should see other plugins being compiled similarly in the builds/opensearch/plugins directory. For plugins in the OpenSearch engine repo, they are in the core-plugins directory because they are part of the OpenSearch engine code base.

Now that you have the necessary artifacts to produce final products, let’s move on to next stage: assemble_workflow.

In build_workflow, you learned that OpenSearch artifacts are generated by calling the root build.sh and component build.sh scripts as they interact with Gradle tasks (OpenSearch Dashboards is similar but interacts with Yarn). To combine or bundle the artifacts into a final product, you need to add more functions in assemble_workflow.

You can use the command below to start the assemble process, as information in build_workflow is saved in build manifest.yml and we can pass the YAML file as the input.

Similar to build_workflow, several file changes are required to support the new distribution parameter in assemble_workflow, such as src/manifests/bundle_manifest.py.

Next, you need to understand the file structure. Unlike build_workflow, where everything is build related, assemble_workflow is separated into bundle and dist. “Bundle” controls the general functions of assemble to create a bundle of the OpenSearch engine and related plugins. “Dist” contains specific business logic for different types of distribution to repackage. For more information about the relationship between bundle and dist, see Assemble Artifacts Based on Distribution Not File Extension.

Before you implement the RPM distribution, you need to clean up the existing code to support older distributions such as Tar and Zip. To do this, remove the from_path function in src/assemble_workflow/dist.py, as it hardcodes the distribution type based on the file extension.

You now have created a new file, src/assemble_workflow/dists.py, that acts as a class selector for the different distributions.

DistTar and DistZip are dist classes. They contain the specific business logic required for the distribution to be properly assembled for creating the bundled final product. Based on the distribution value parsed from build manifest.yml, you can return the corresponding class.

Take a look at class DistTar as an example before you implement a similar DistRpm.

The DistTar class extends Dist class with two @abstractmethod to be implemented: extract and build. Extract takes the OpenSearch engine tarball artifact from the build stage, extracts the content so you can install plugins, and adjusts the configuration. Build (not to be confused with build_workflow) wraps the extracted content after the extract process and regenerates a new tarball as the final bundled product. Extract and build can be treated as tar and untar or zip and unzip, respectively.

After extracting the content, additional refinements can be made in src/run_assemble.py, which was called by assemble.sh in the opensearch-build repo root directory.

The flow runs as assemble.sh calls run_assemble.py, which calls Bundles.create. It then returns the class bundle_opensearch.py, which creates an instance of BundleOpenSearch that extends Bundle, and then Bundle internally calls Dists.create, which returns DistTar and calls extract.

After extraction, you return to run_assemble.py to continue installation.

You now have completed installation, so you return to run_assemble.py to call the following remaining functions:

When you check out the business logic for bundle.package, it internally calls build from DistTar, which creates a tarball based on the extracted content.

The current directory structure, or tree, after assemble_workflow is similar to the tree for build_workflow. The difference is that this tree has a new dist folder with the new artifacts.

Congratulations! You have implemented the RPM distribution creation process within the opensearch-build code base.

We continually improve by adding new distributions to the OpenSearch Project. With the addition of RPM, we have set up a new structure, standard operating procedures, and an entry point to encourage the community to contribute code more easily. For example, we are working with Graylog on DEB distribution implementation, using similar steps as RPM; the draft PR is in review. We encourage you to engage with us on improving the process for adding new distributions to OpenSearch. 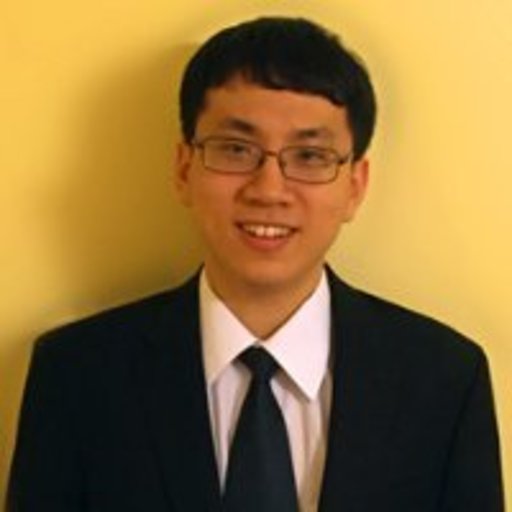 Jiaxiang (Peter) Zhu is a System Engineer at Amazon Web Services. He mainly works on infrastructure, automation, and release of the OpenSearch Project. He likes ’80s books, ’70s music, and ’60s movies.