In this post, we want to dive deep into snapshot operations in OpenSearch. Snapshots are backups of a cluster’s indexes and state. The state can include cluster settings, node information, index metadata, and shard allocation information. Snapshots are used to recover from failures, such as a red cluster, or to move data from one cluster to another without data loss. Remote searchable snapshots will enable users to restore a snapshot without downloading all the shards on the cluster nodes, requiring us to dive deep into the existing snapshot operations within OpenSearch.

This post will help you understand the fundamentals of snapshot operations. If you enjoy this topic and want to put your knowledge into practice, please consider contributing to remote searchable snapshots.

What snapshot operations can I perform on my cluster?

You can perform the following snapshot operations on a cluster:

The SnapshotsService is responsible for creating and deleting snapshots, whereas the RestoreService is responsible for restoring snapshots. We will cover these operations in detail in the following sections. A key thing to note is that snapshots are incremental in nature, meaning that they only store data that has changed since the last successful snapshot. Refer to Take and restore snapshots for more information.

How are snapshots stored?

A snapshot is a backup taken from a running OpenSearch cluster and stored within a repository.

What is a repository?

A Repository acts as an interface on top of an underlying storage system and provides higher-level APIs for working with snapshots. The repository interface is part of the plugin feature of OpenSearch. Out of the box, OpenSearch comes with three repository implementations—Amazon Simple Storage Service (Amazon S3), Azure Blob Storage, and Google Cloud Storage—that can be optionally enabled in your installation. External developers can also provide their own implementation of a repository if none of the existing implementations fit their use case.

The abstract class BlobStoreRepository provides the base implementation of a repository, which implements all common snapshot management operations. The default shared file system repository is implemented by the FsRepository, whereas the repositories for other types of storage systems are provided as plugins.

The following diagram depicts the relationships between Repository, BlobStore, and BlobContainer. 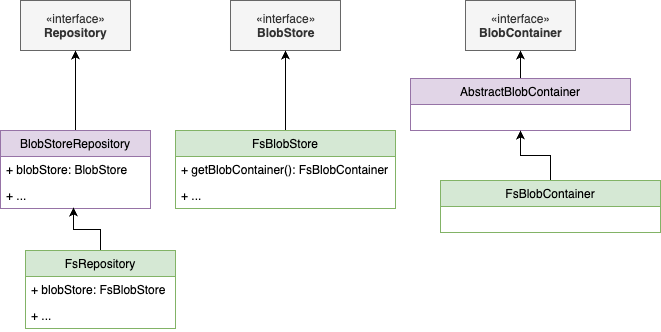 What is the structure of a repository?

A repository can store multiple snapshots, which can contain a single index or multiple indexes. At the low level, the RepositoryData object holds the list of all snapshots as well as the mapping of the index name to the repository IndexId. For each shard i in a given index, its path in the blob store is root/indices/${index-snapshot-uuid}/${i}. The following diagram shows the directory structure of the blob store (For more information, see Javadocs). 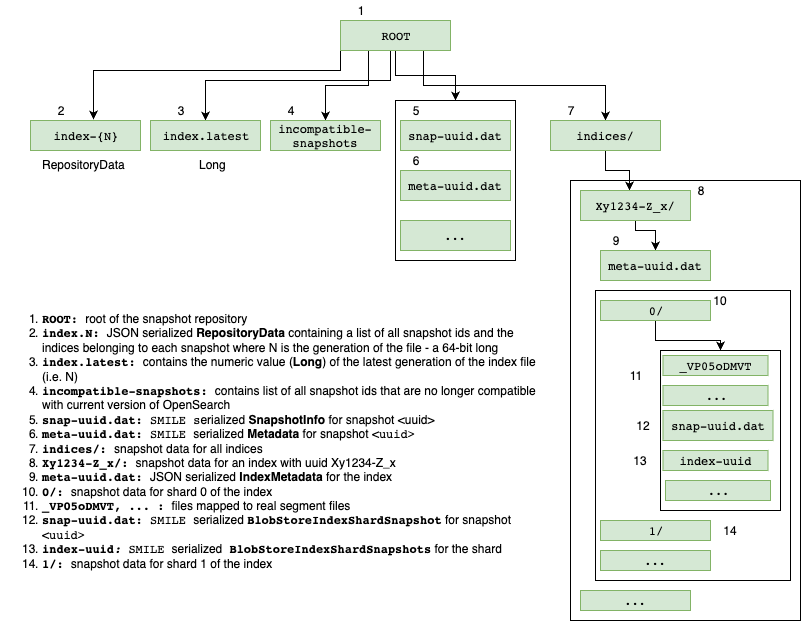 How does snapshot creation work?

Clients can create snapshots by performing a PUT operation on the _snapshot API (For more on the snapshot creation API, see Take snapshots). The SnapshotService.createSnapshot method is called to create a new snapshot. Only one snapshot creation process can be running at a given time.

How do the nodes coordinate for a snapshot operation?

The ClusterState object holds the information about the current cluster state.

There are two communication channels for snapshots between the cluster manager and all other nodes:

The following image depicts the interaction between the cluster manager node, the data nodes, and the ClusterState object described above.

Flow of events for snapshot creation

The following image depicts the flow of events for snapshot creation. The numbers in the image correspond to the steps within the flow outlined below. 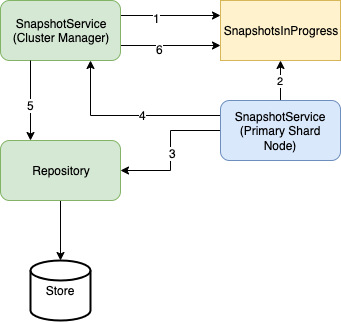 SnapshotsInProgress is the container for the snapshot metadata that is part of the ClusterState object, hence this is updated by the cluster manager node using a ClusterStateUpdateTask.

Both the cluster manager and the data nodes can read from and write to a blob store. All metadata related to a snapshot’s scope and health is written by the cluster manager node only. Data nodes can only write the blobs for shards they hold as primary. The nodes write the primary shard’s segment files to the repository as well as metadata about all the segment files that the repository stores for the shard.

What happens on the primary data node for snapshot creation?

In the shard’s primary data node, the BlobStoreRepository.snapshotShard method is executed. The method performs the following steps:

After all primaries have finished writing the necessary segment files to the blob store, the cluster manager node finalizes the snapshot by invoking Repository.finalizeSnapshot.

This method executes the following actions in order:

How are snapshots deleted?

Terminating a snapshot starts by updating the state of the snapshot’s SnapshotsInProgress.Entry to ABORTED. Then, the following steps are performed:

The following image depicts the interaction between the cluster manager, the repository, the data nodes, and the cluster state. The numbers in the image correspond to the steps described above. 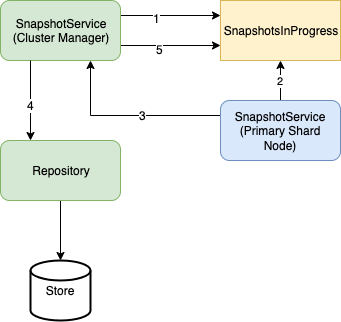 Snapshot deletion is executed exclusively on the cluster manager node. To delete a snapshot, the following steps are performed:

The following image depicts the interaction between the cluster manager, the repository, and the cluster state. The numbers in the image correspond to the steps described above.

In the cluster manager node, BlobStoreRepository.deleteSnapshots is executed. This method executes the following actions in order:

What happens when I restore a snapshot?

The RestoreService.restoreSnapshot method is used for restoring a snapshot from the repository. This method is executed when the clients call the _restore API under a particular snapshot to be restored. The following steps describe the snapshot restore operation:

How can I contribute?

We are currently working on searchable snapshots, which involves working directly with the snapshot restore process and the repository interfaces. If you’d like to contribute, the following issues would be a great place to start:

Share on:
« SQL search relevance, selective aggregation, and window functions in OpenSearch From the editor's desk: OpenSearch and inclusion » 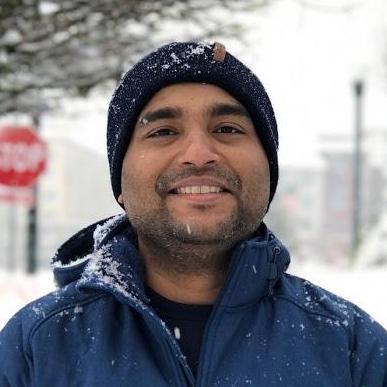 Rabi Panda is a Software Engineer at AWS working on the OpenSearch project. 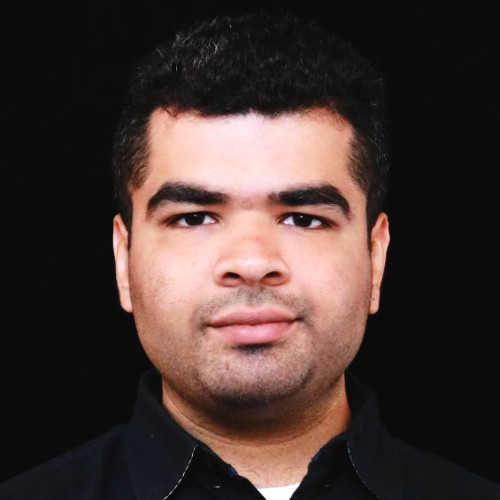 Kunal Kotwani is a Software Engineer at AWS working on the OpenSearch project. 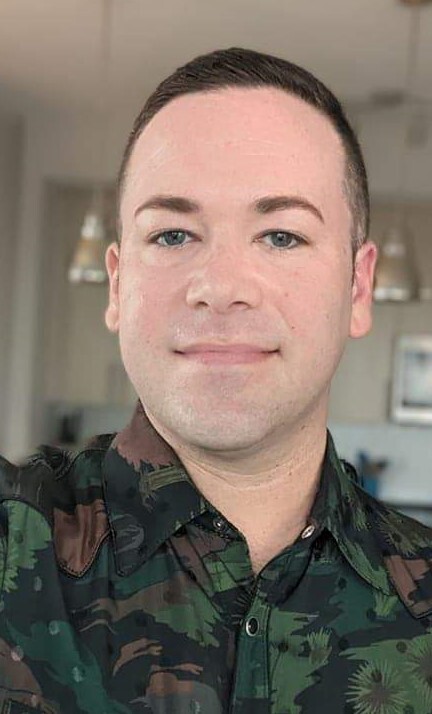 Nate Bower is the Senior Technical Editor for OpenSearch.